Wearing necklaces of intense colors has been part of the culture of many peoples for centuries, especially tribal ones, for whom form, materials and colors often have a specific tradition and meaning. The jewels in addition to giving beauty to women, are also powerful amulets.
Berber women combine amber and coral, whose intense red is a symbol of warmth and life force, with glass beads, enamelled silver and coins. Instead the Masai women, in Kenya, are characterized by strong and vivid colors. made with infinite patience and a surprising amount of beads, while the Indians are covered with long strands of glass beads or semi-bright colors, shells and metal buttons. The "trade beads", so called because they were produced in Europe, particularly in Venice and used as a bargaining chip to buy goods in Africa.
Many of these necklaces have a long history and the precious objects that often form them have traveled from one country to another. 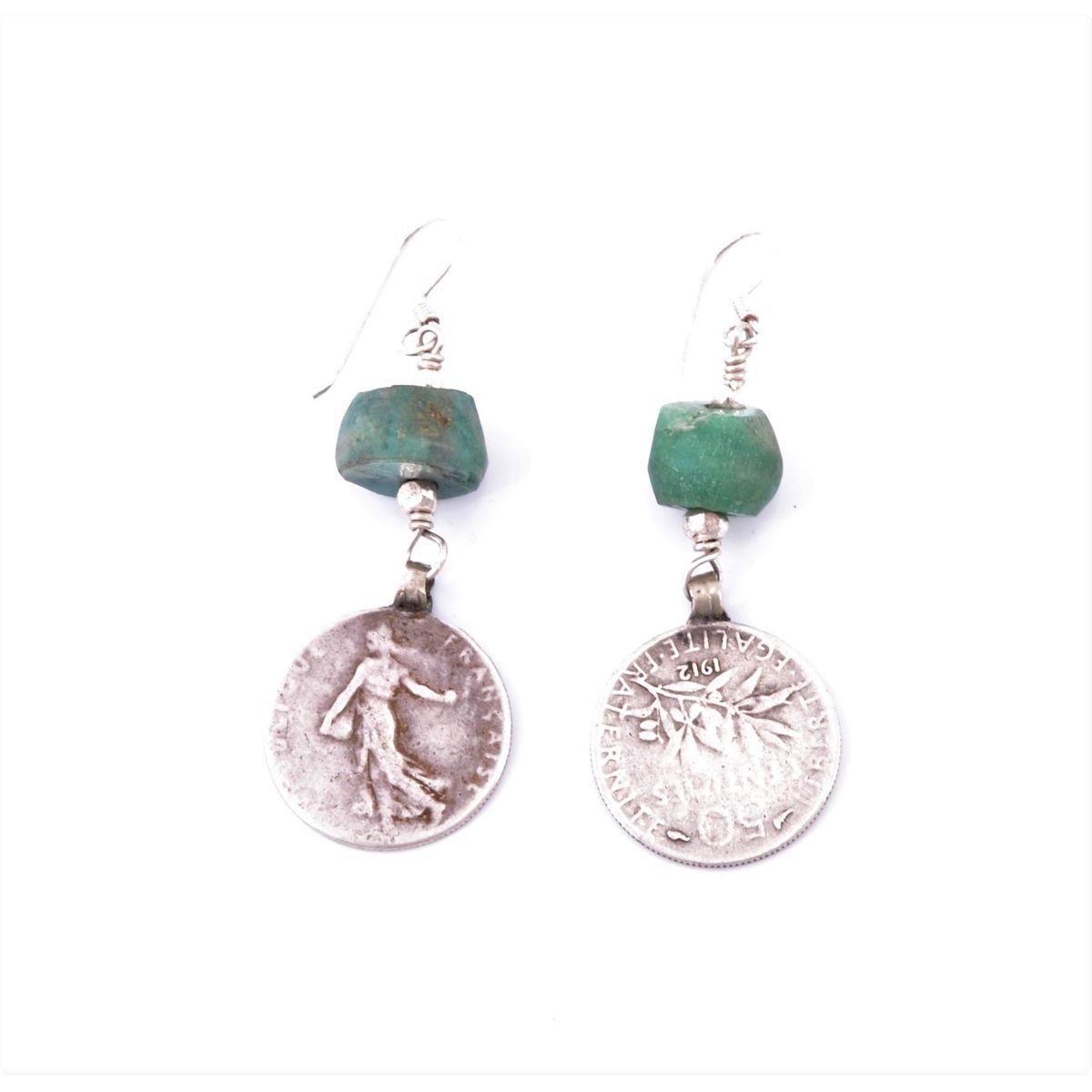 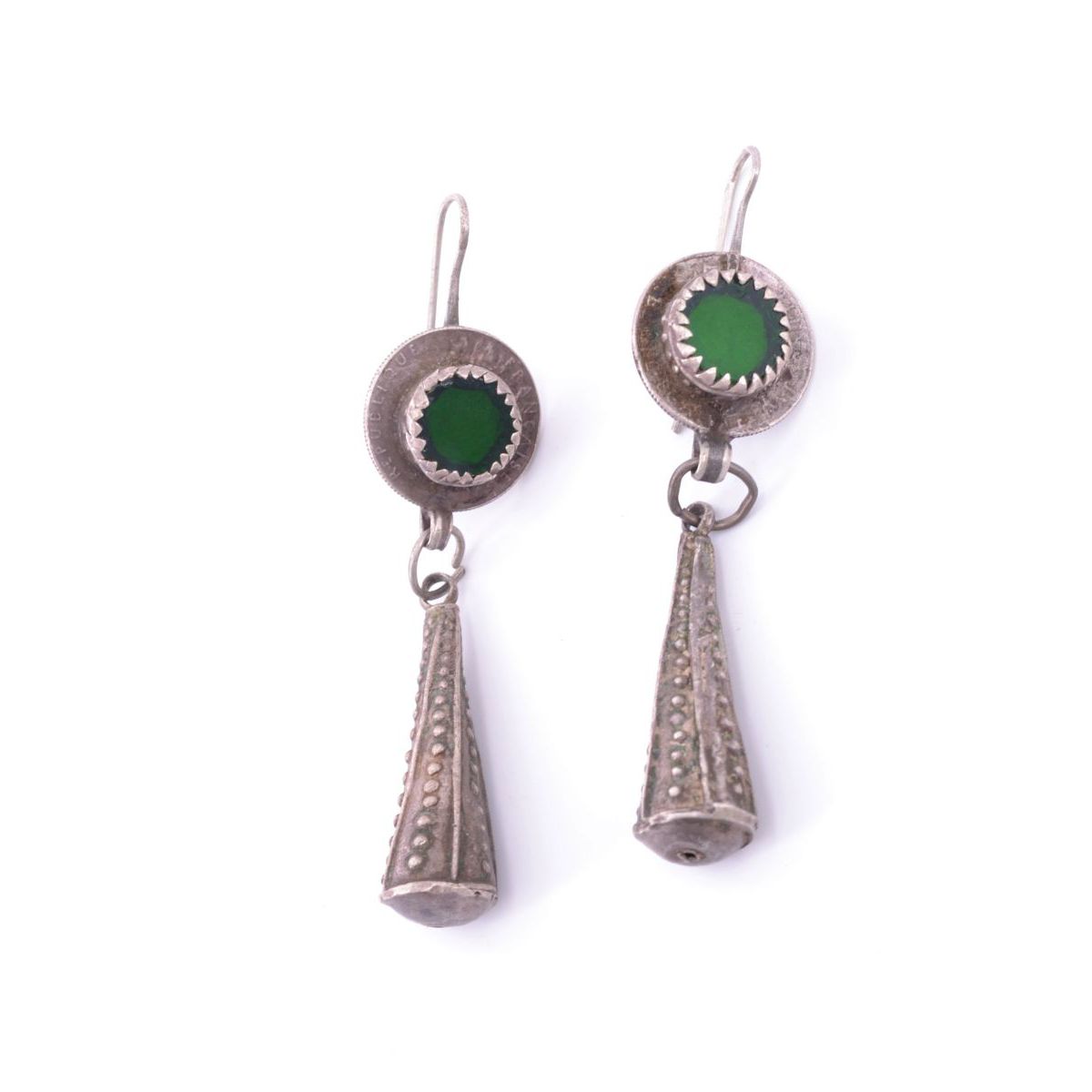 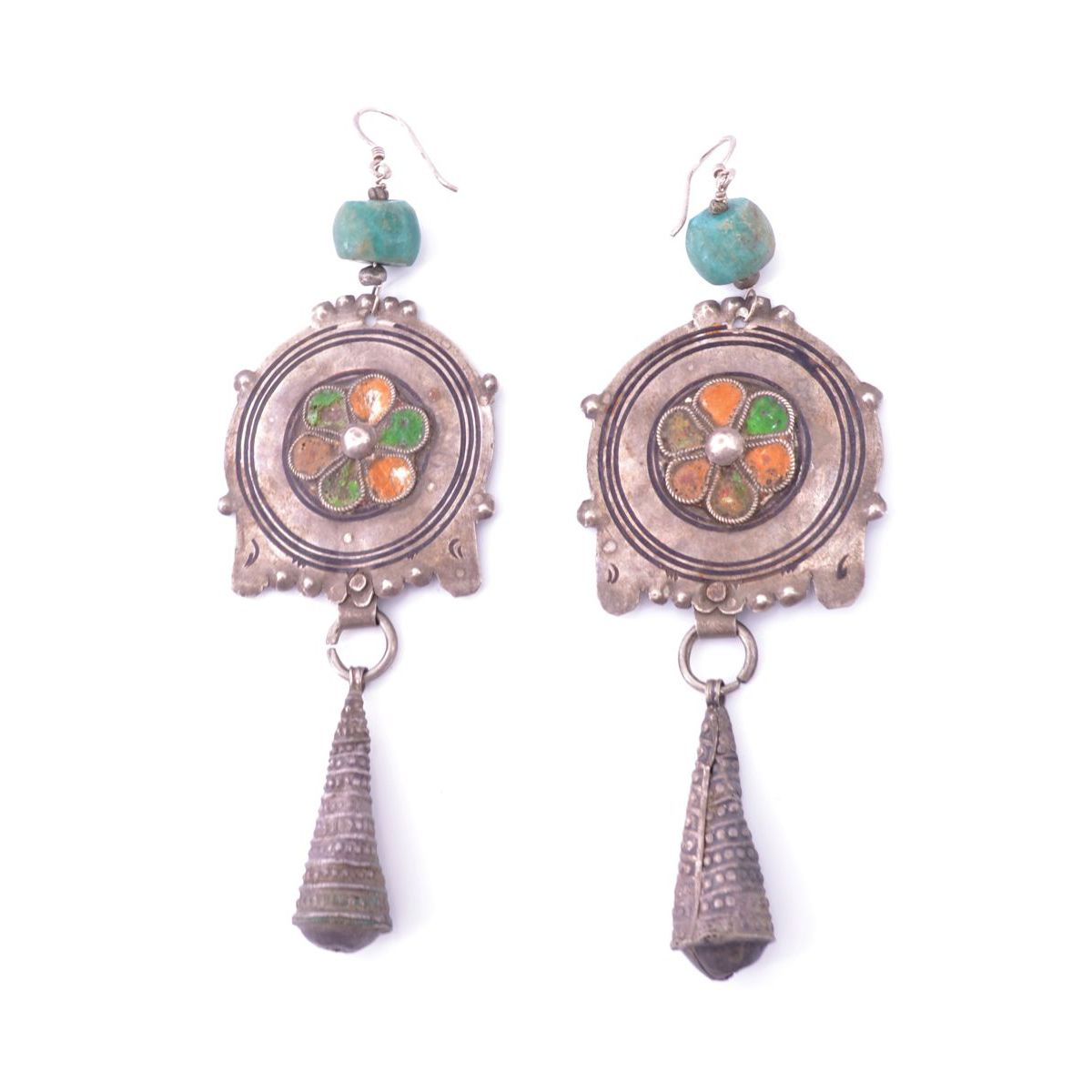 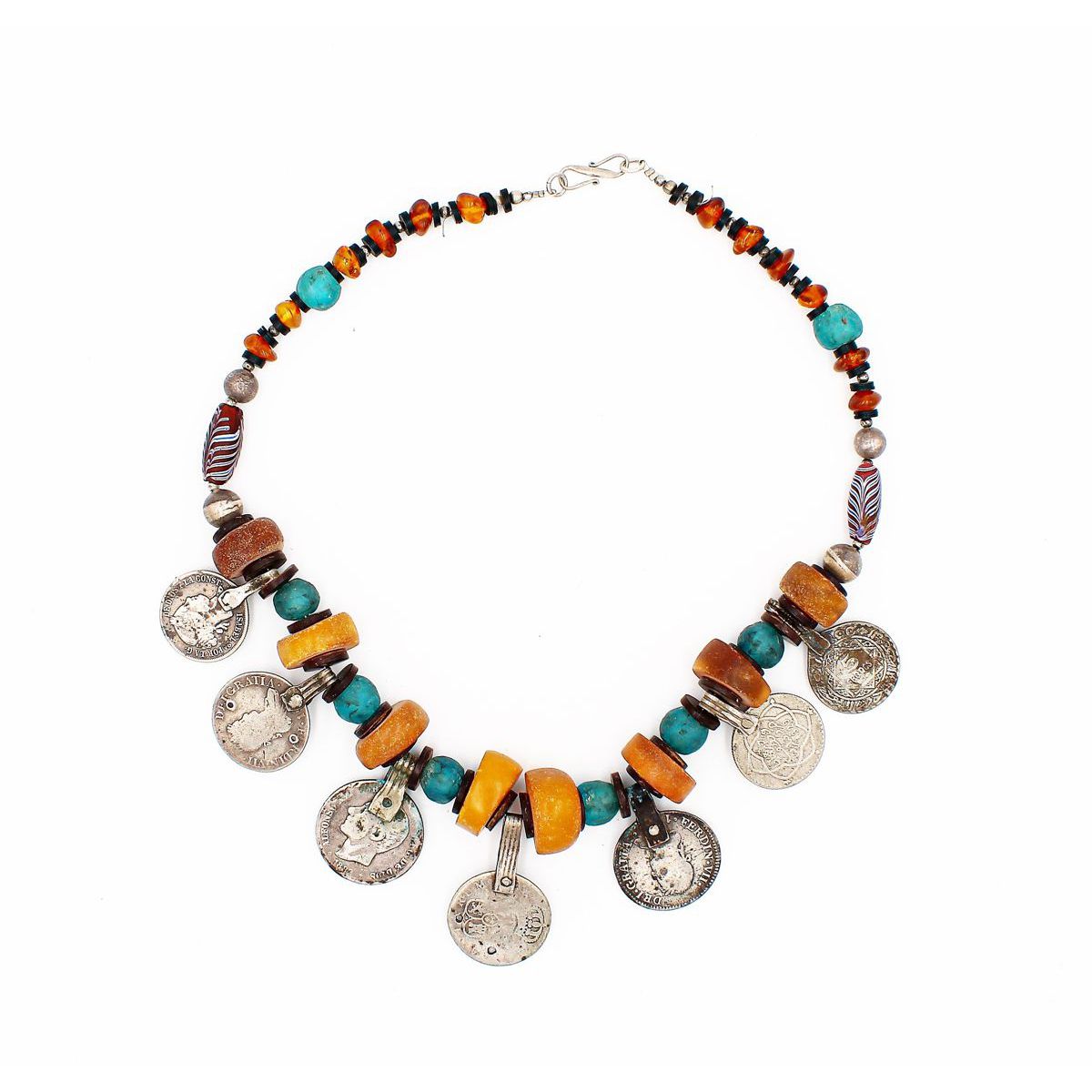 Ethnic choker necklace, with original Baltic amber antique silver coins, and Venetian glass beads. Length 48 cm. Closure to them. Wonderful jewel from the south of Morocco, a region mainly inhabited by the Berber population, the Amazigh. In particular glass beads and some precious amber, have been used in the past as a bargaining chip between Europe and Africa.
€ 448.00 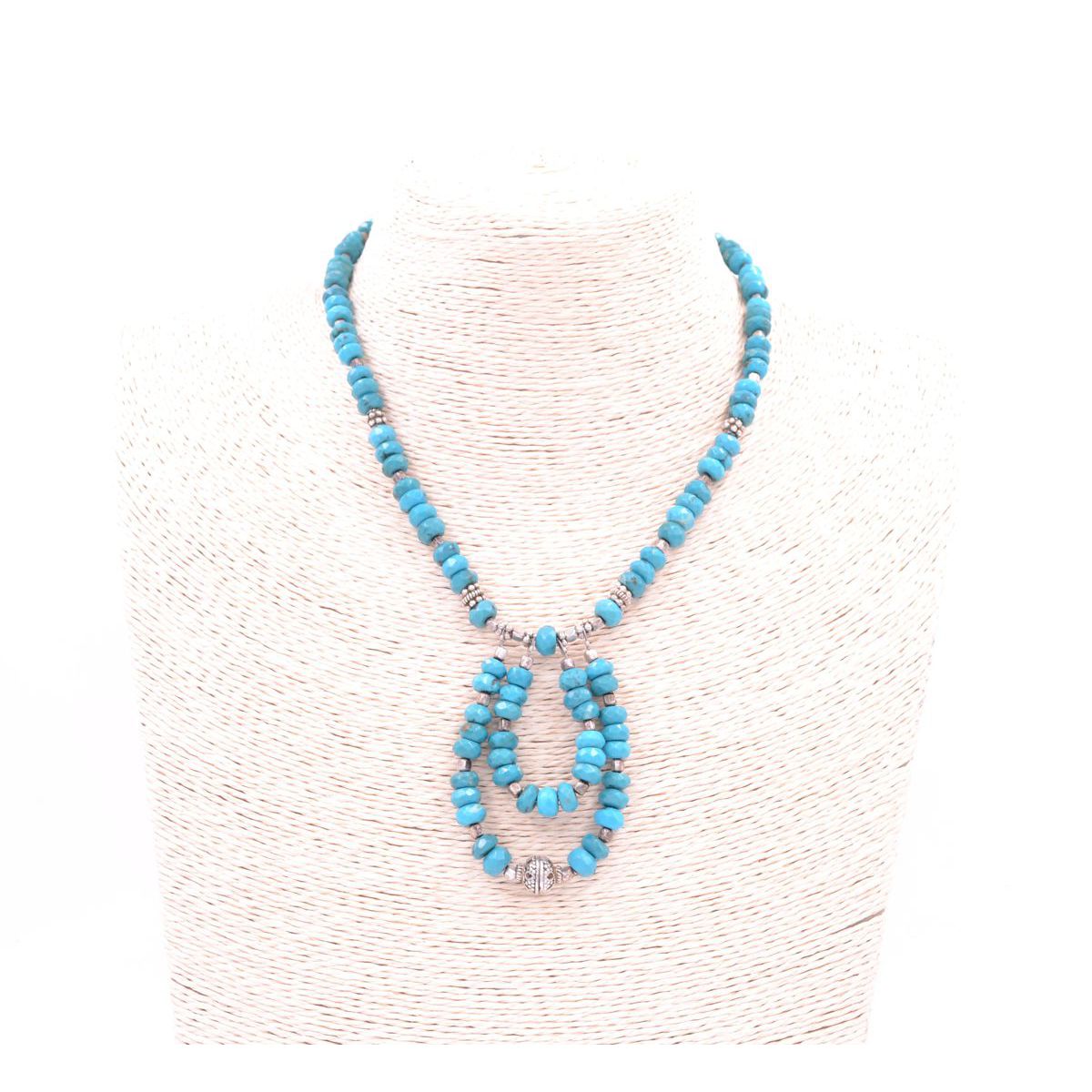 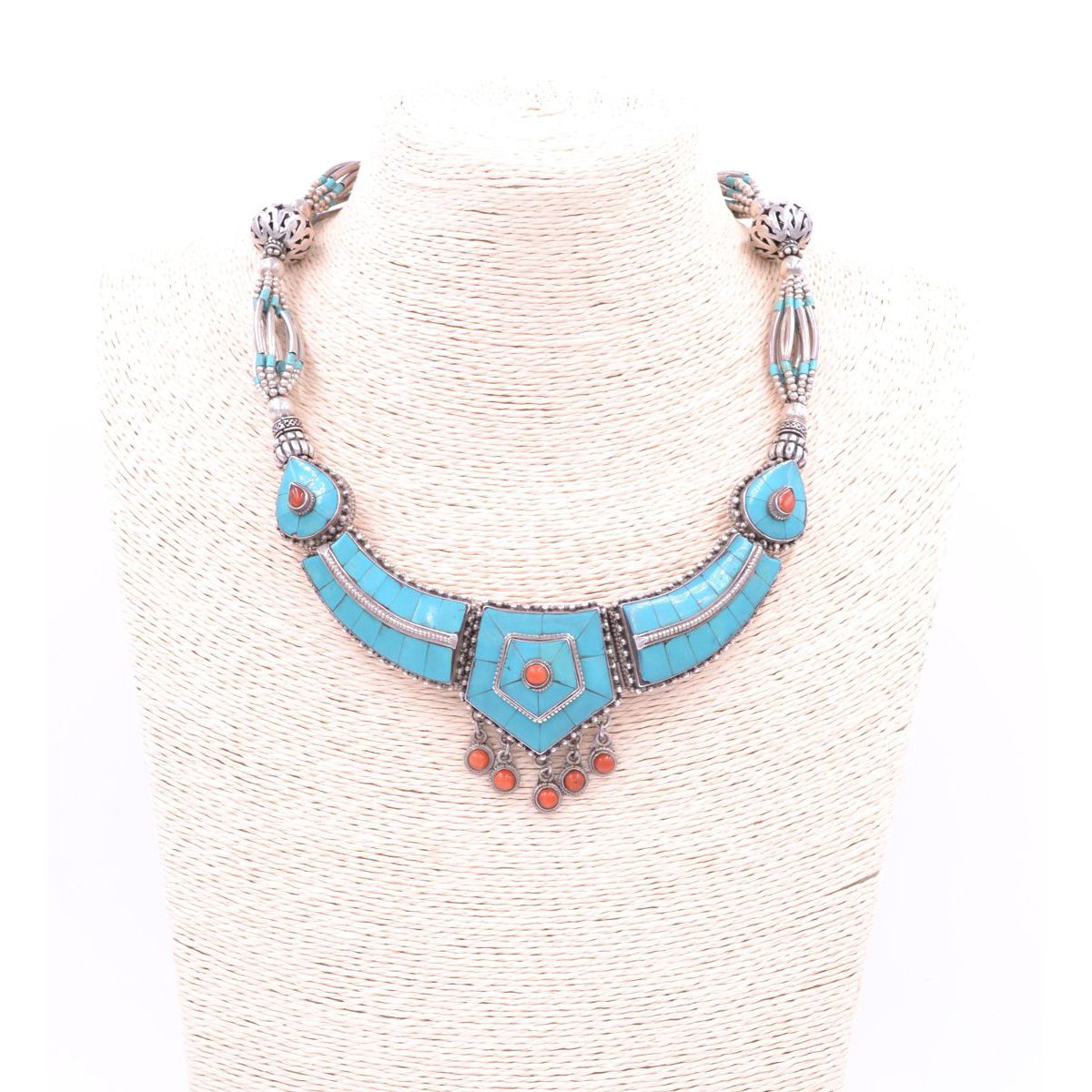 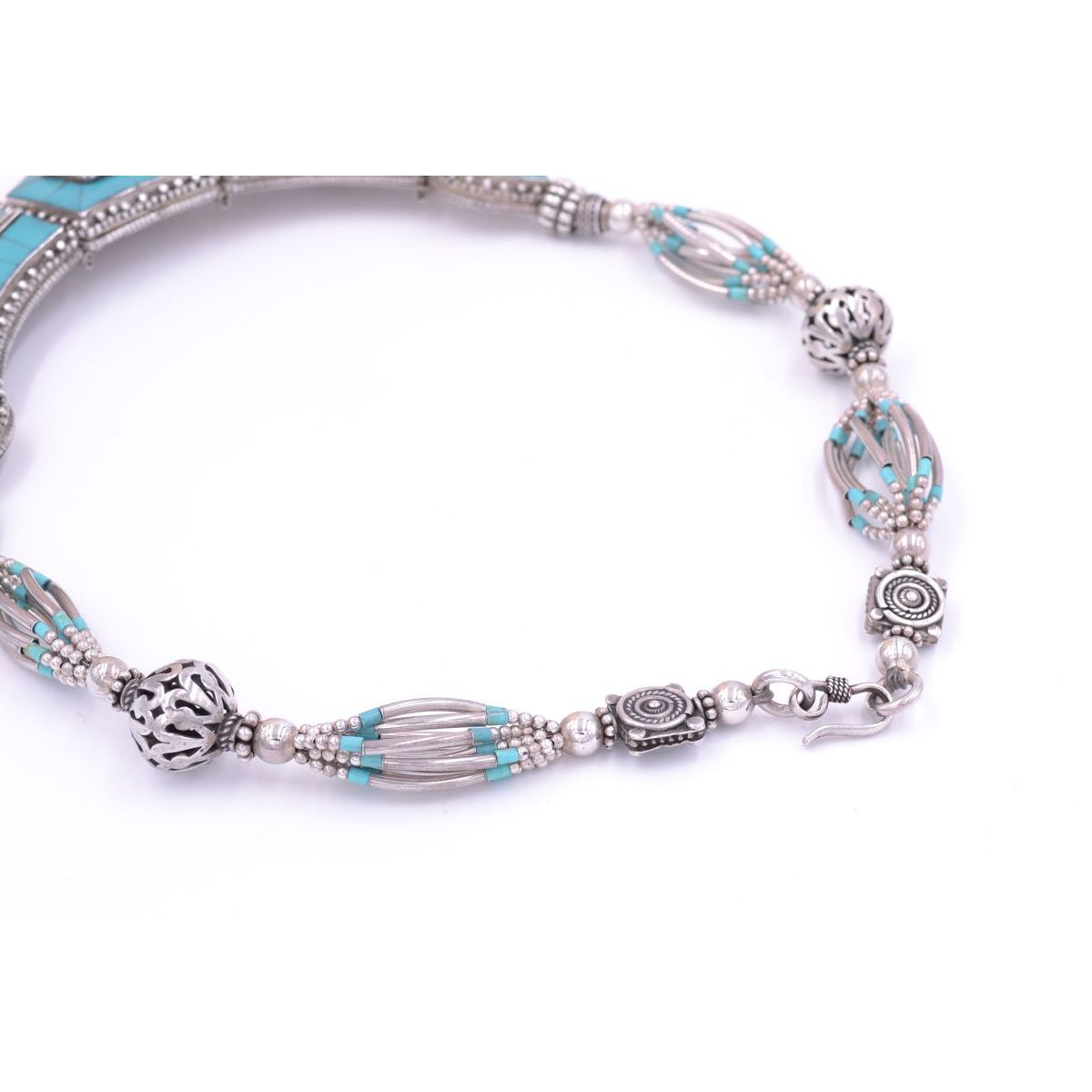 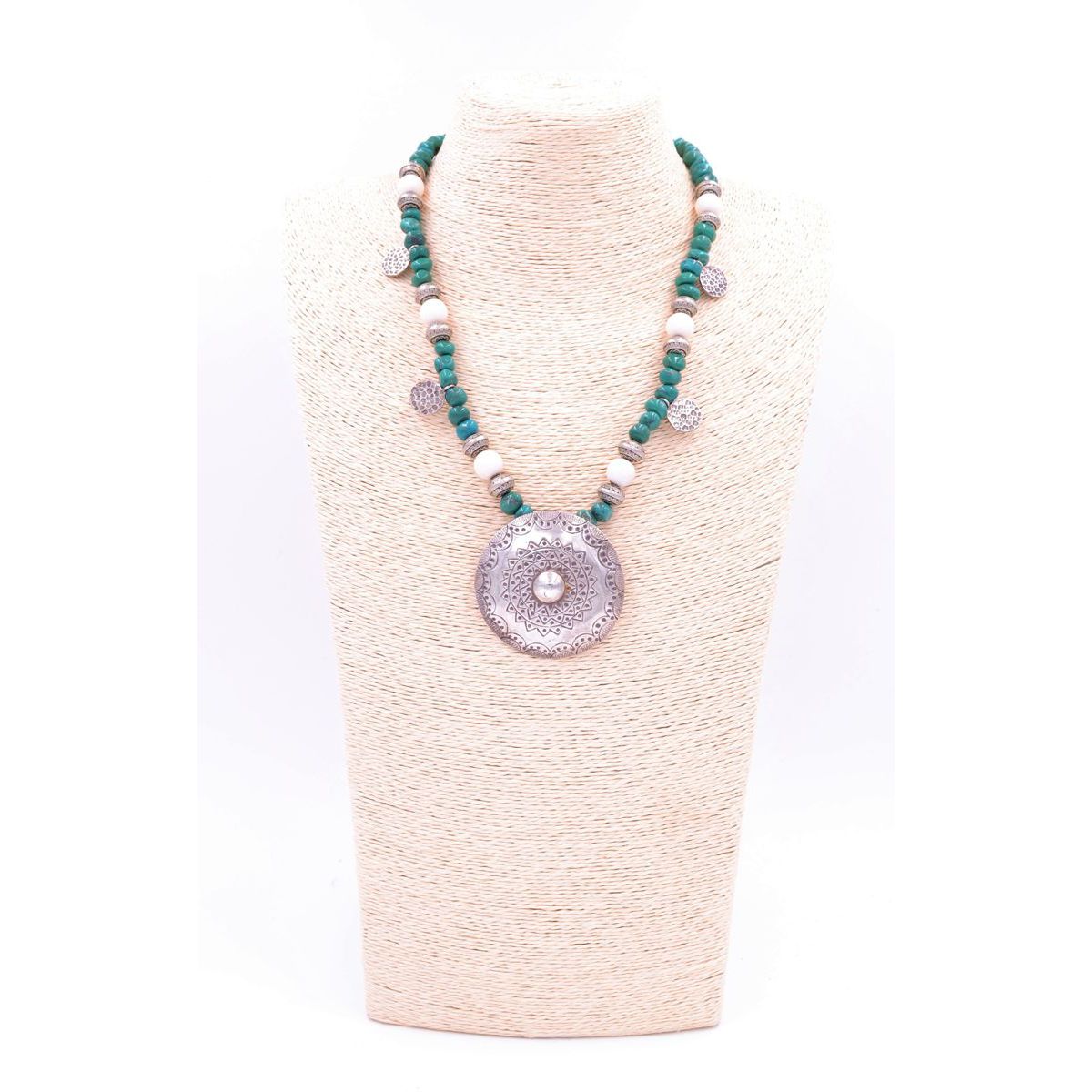 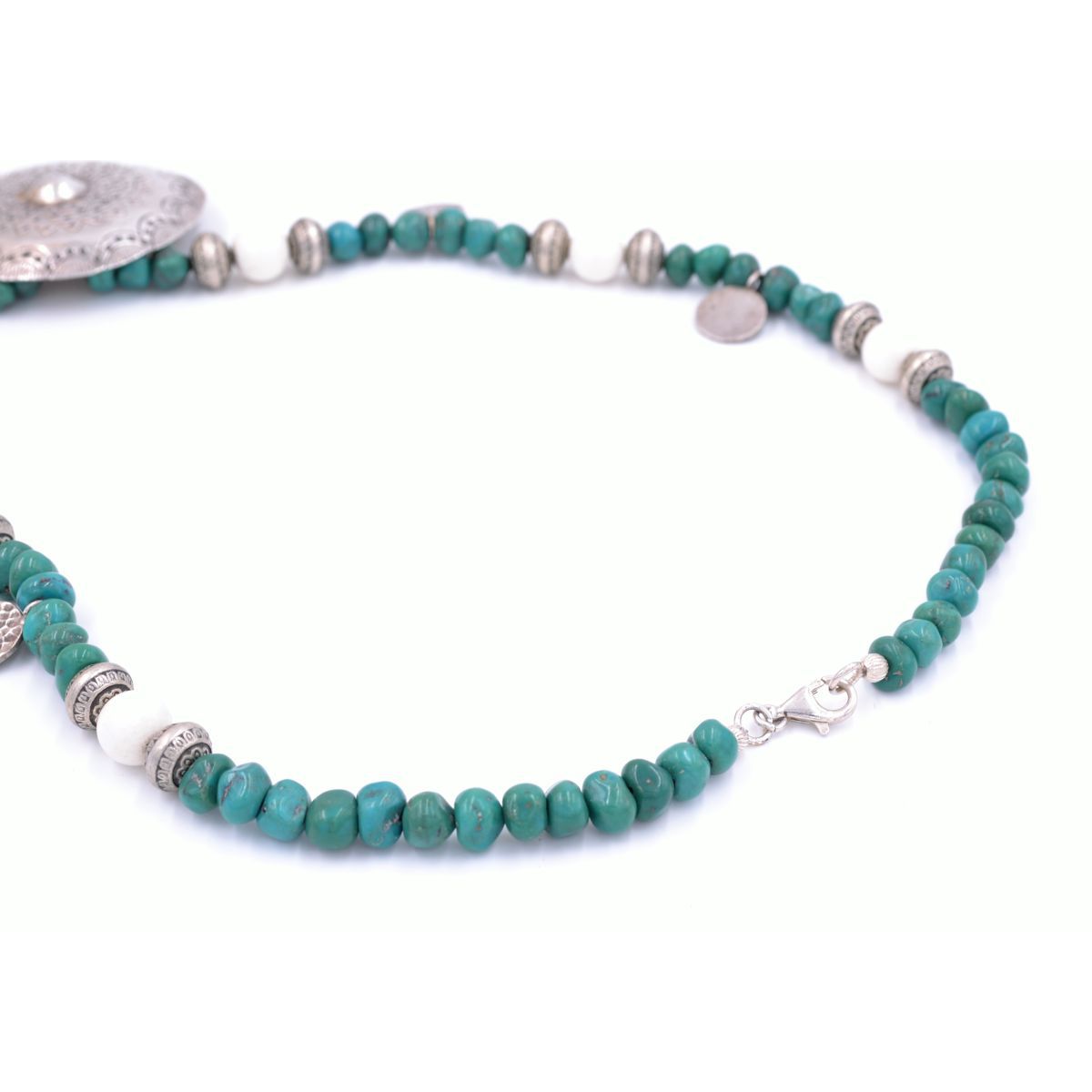 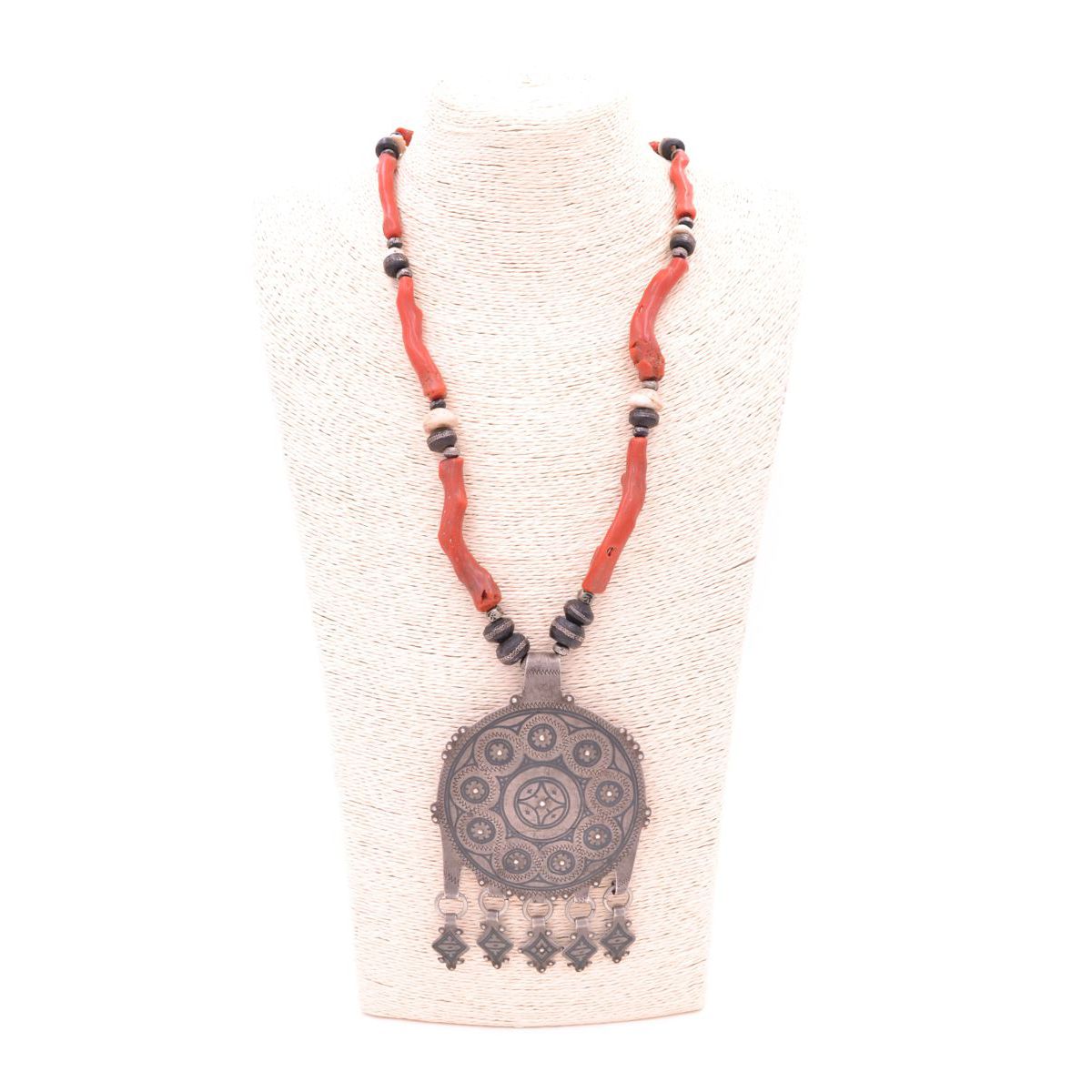 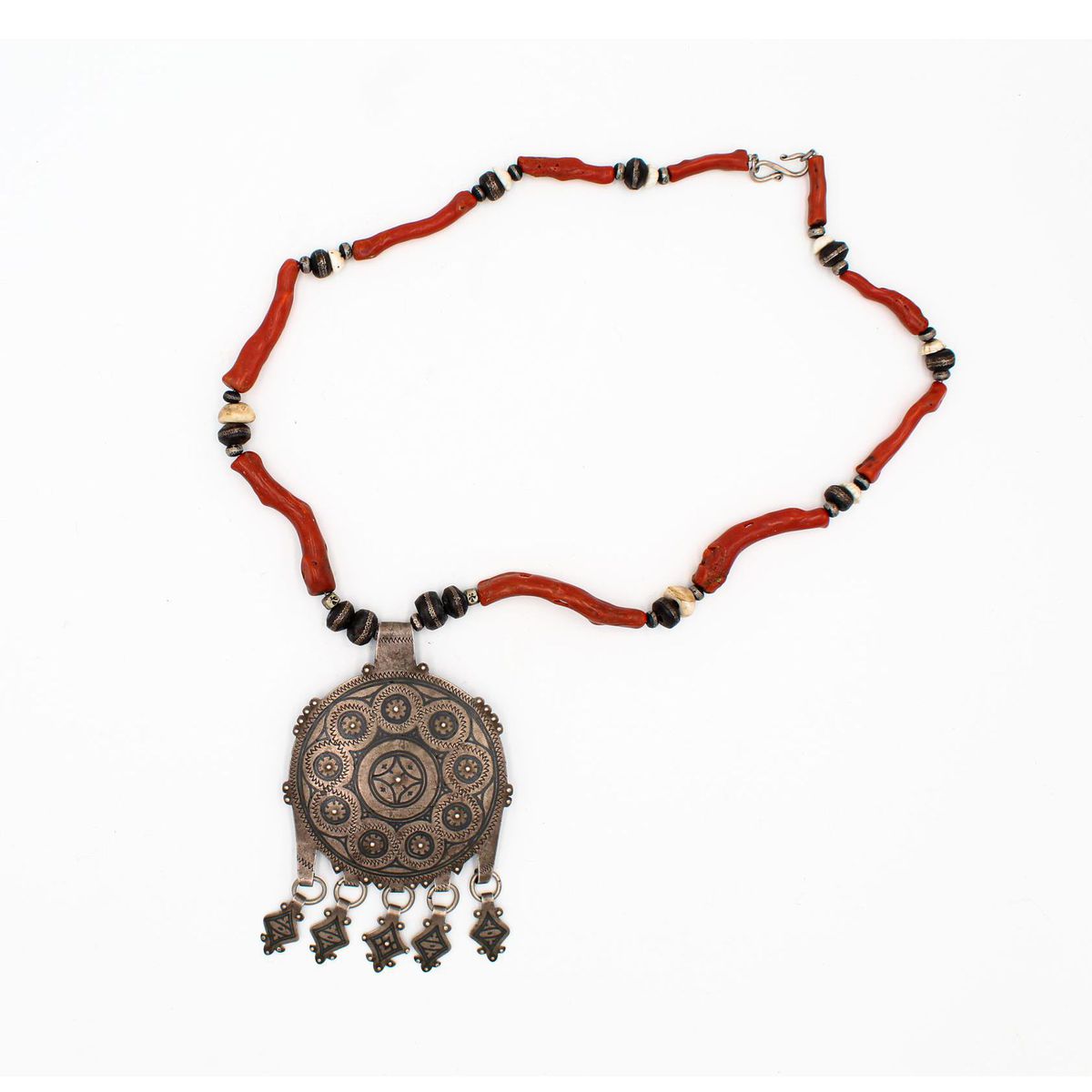 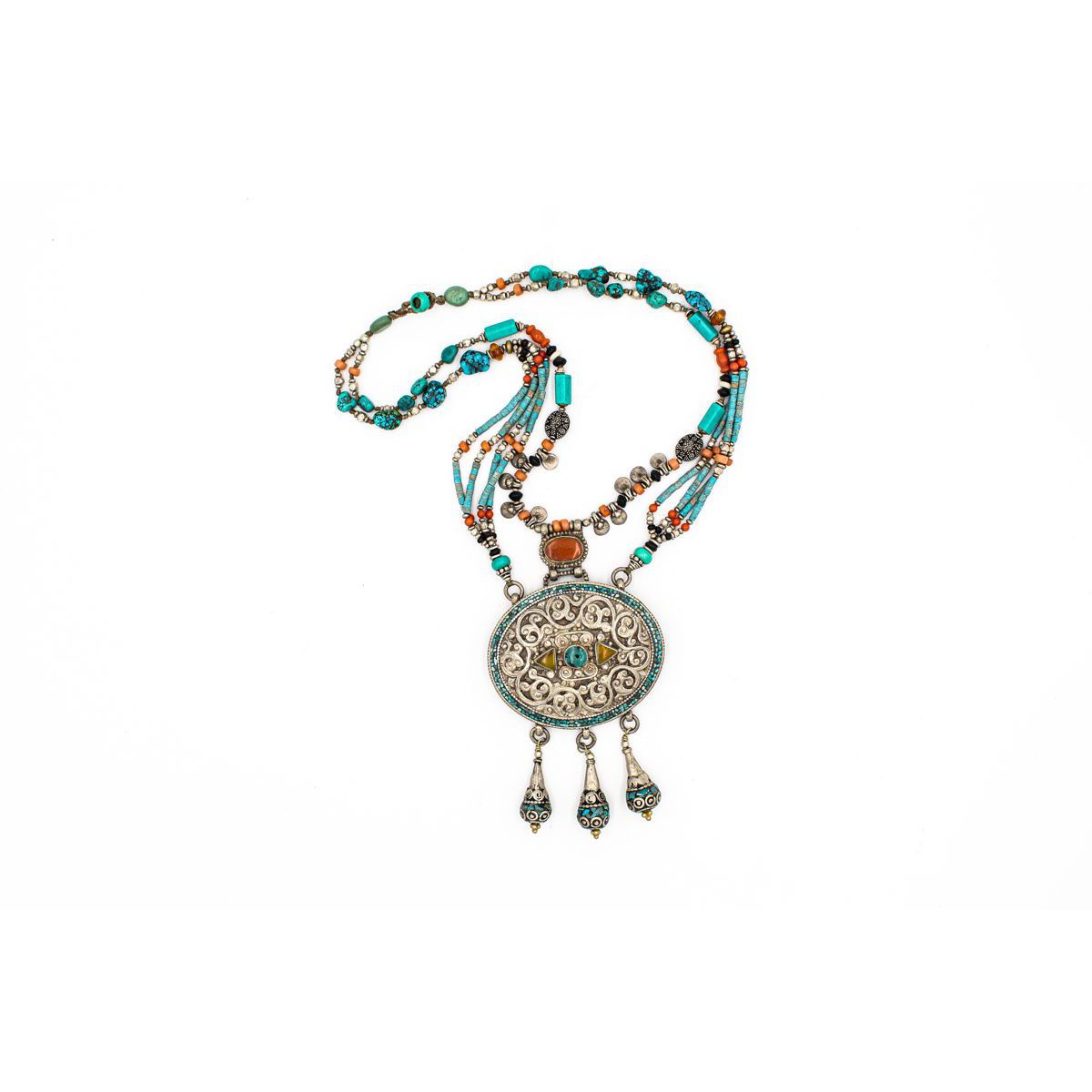 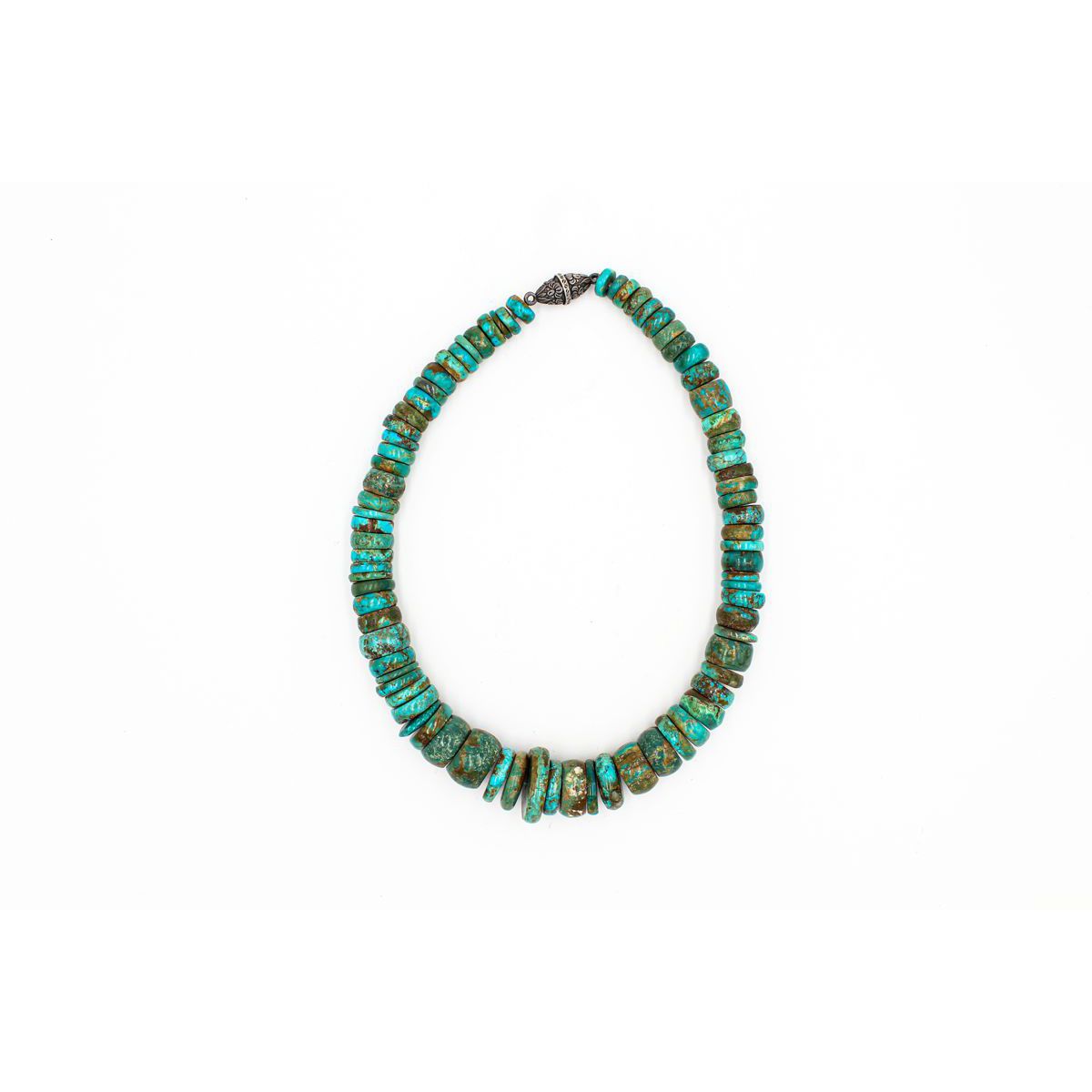 Choker with natural turquoise stones and silver magnet closure Length 54 cm From: Mexico.
€ 648.00
Earrings Necklace
Brassilk.it uses cookies and other technologies to ensure a reliable and secure site, measure performance, provide a personalized shopping experience and themed advertising. To do this we collect data relating to users, their behavior and their devices. By selecting "I accept", the user consents to this data collection and authorizes us to share this information with third parties, such as our marketing partners. In case of refusal we will only use essential cookies and the user will not receive personalized content. Select "Set Preferences" for further details and manage your options. The user can change his preferences at any time. For more information, please read our privacy policy.
Set Preferences
I accept
USE EXTRA10 CODE 10% DISCOUNT on new collections and non-promo items
Set Preferences
We collect information on user experience to provide relevant advertising content on our products. To select content suitable for the interests of the user, we may for example use information about his interactions on the site. We will share this information with third parties such as Facebook and Google. This allows us to provide relevant advertisements on third party websites and apps. We may also collect data, such as process data on advertisements (for example, when the user clicks on an advertisement and then makes a purchase) by making cross-connections between multiple devices.
Based on user interactions with the site, brand preferences and purchasing affinity, we will be able to show you personalized content: for example, items in the catalog that are appropriate to your preferences.
We use data to improve our shopping experience, avoid errors and test new features, as well as perform user experience and analysis relevant to the shop's activity.
The data collected by these services are necessary for the technical performance of the website, to provide basic purchasing functions and for security and fraud prevention purposes.
Save Preferences